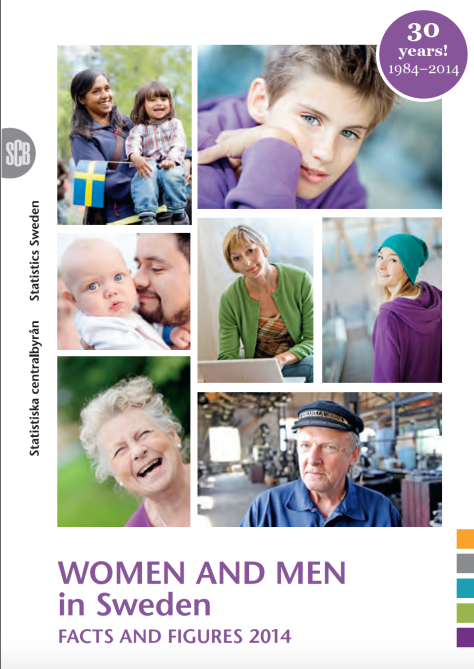 Thankfully the sentence below the headline mentions “women and men, girls and boys shall have the same rights and opportunities in terms of physical integrity.”

That’s fantastic! But this equality between the genders is not represented in the title.

So I wondered if trying to say “violence against people” would similarly be disadvantageous, as we typically think that it’s the man committing violence against the woman.

Assuming that it is disadvantageous to say violence against people, that is, with more men committing violence against women (than vice versa), the comparisons should still be in the report. This should be in the report for three reasons: 1) To show the extent that men and women differ with respect to this type of violence; 2) to be consistent with every other section (since all other topics compare the two genders); and 3) Not discussing this issue says that women either don’t hit men, or that as a man, you’re not supposed to report it if it happens-which is not the right signal to send to citizens.

The report also seems to jump around, switching from violence against women to a report of assaults. These numbers jump significantly. Men are way more likely to be hit outdoors, while women are much more likely to be hit indoors. But the authors choose to discuss “hidden statistics” rather than interpreting the graph. 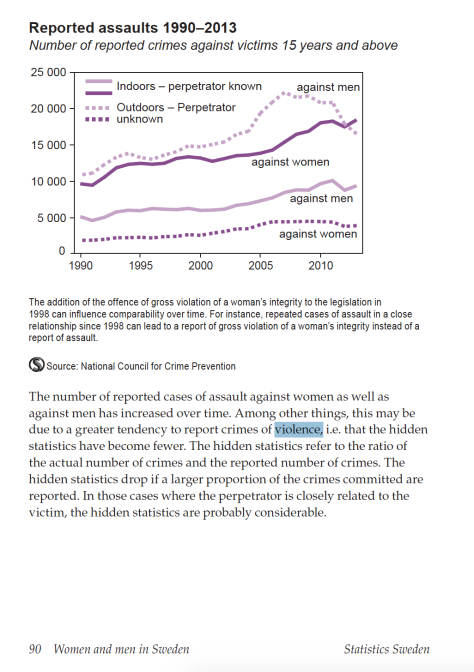 So should the report neglect women’s violence against men? Let’s see what the literature has to say about this issue:

Apparently domestic violence, intimate partner violence, family violence, partner violence, violence against women—are all defined differently throughout the literature. The thing they all have in common is that they all refer to a partner committing violence against their partner. However, the literature definitions may vary and can expand on violence to include specific acts of violence, such as psychological, emotional, and sexual violence, as well as the threat of violence (Finnbogadóttir & Dykes, 2012). Domestic violence research indicates that violence is obviously associated with negative outcomes for the victim (Beydoun, Beydoun, Kaufman, Lo, & Zonderman, 2012), and is also associated with children’s emotional, behavioral, and social problems (Evans, Davies, & DiLillo, 2008; Wolfe, Crooks, Lee, McIntyre-Smith, & Jaffe, 2003). Since child abuse is a worldwide problem (Stoltenborgh, van IJzendoorn, Euser, & Bakermans-Kranenburg, 2011), it can be important to understand risk factors surrounding child abuse (see Brown, Cohen, Johnson, & Salzinger, 1998).

A large debate within the partner violence literature is whether violence is 1) perpetrated by the male and the female is the victim or 2) that both partners may inflict violence upon one another (Archer, 2000). Many feminists focus on violence against women, while family violence researchers; sometimes called family conflict researchers (Archer, 2002), focus on the bi-directionality of both genders as perpetrators and as victims (Archer, 2002). The debate around these terms is beyond the scope of this thesis, but other sources provide a review on this topic (Enander, 2011).

Conclusion: saying “men’s violence against women” is already picking a side, since each label connotes a different meaning and the research is attacked from a different angle. For example, “family violence” researchers typically look at how partner to partner violence affects the family (mother, father, and child), while “violence against women” research mainly just looks at a man’s violence to their woman partner.

Prevalence of Partner to Partner Violence:

After reviewing the literature, Enander (2011) concludes that no violence is gender-neutral. In fact, two meta-analyses conclude that men and women use similar amounts of physical aggression towards their partners (Archer, 2000, 2006). Men and women, in relation to partner violence, is also similar with respect to the instrumentality, such as controlling behavior (Graham-Kevan, 2007). However, the degree to which they inflict an injury is biased toward men. For example, although women are slightly more likely to use physical aggression compared to men, as men inflict injury more often (62 percent) than women (38 percent) against their partners (Archer, 2000). There are gender differences that may help to explain the levels of injuries: for example, women are more likely to slap, kick, bite, punch, or hit their partner with an object, while men are more likely to beat-up, choke, or strangle their partner (Archer, 2002).

Prevalence. Based on a national sample in Sweden, Rådestad et al. (2004) found that 2 percent of women said they had been hit by their partner. Nearly two-thirds of these instances contained only one perpetration of being hit (61 percent), while 15 percent were hit three or more times. A Swedish study found that 1.3% of women either during or shortly after pregnancy were abused by a close acquaintance or relative (Stenson et al., 2001). In looking at the year prior to pregnancy, the same study found that this number rose to 2.8%. The wider they defined violence against women and the farther they looked back into a woman’s history, the more likely she was to have experienced abuse. In fact, 19.4% of women experience some type of physical, emotional, or sexual abuse between their birth and when they are 20 weeks post-partum. Stenson et al. (2001) concludes that routine practices need to be established for screening for violence against women during pregnancy.

Conclusion: In looking at the world and Swedish literature, it seems like men and women may commit partner violence equally as often, but that when men hit, they are more likely to injury their partner (e.g. hit harder).

While 2-3 % of Swedish women admit to having partner violence, these numbers are more prevalent if the definition is expanded to include other types of violence, such as emotional and sexual abuse–however I did not find numbers for men/fathers using these broader definitions and so it is difficult to compare.

To be fair–a recent article in The Lancent is a systematic review of intimate partner homicide, where they estimate, based on 66 countries’ data, that 13.5% of homicides are by their intimate partners. And that women are 6 times more likely to die from an intimate partner than a man.

However, men are still victims of partner violence, even if it’s to a much less extent (both in terms of frequency and degree) and therefore, their voices should still be heard.

Rådestad, Ingela, Rubertsson, Christine, Ebeling, Marie, & Hildingsson, Ingegerd. (2004). What factors in early pregnancy indicate that the mother will be hit by her partner during the year after childbirth? A nationwide Swedish survey. Birth, 31(2), 84-92.